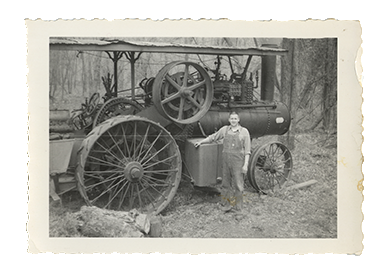 How did innovation help people achieve a better way of life?

The desire of a few local steam buffs to share in history of the use and innovation of steam power necessitated the purchase of suitable land for an annual reunion. Twenty-two acres (our present main campus) were purchased and hundreds of thorn apple trees cleared. A dam was built in Mud Creek to form Duck Lake as a source of water for the engines. The group, then called LaPorte County Threshermen, held their first show and reunion in 1957. Traction engines were the main feature and provided most of the power. A sawmill was added in 1959, the electric plant in 1961, and the Browning crane in 1962. At the suggestion of Bruce Achor, a couple of members purchased a steam locomotive in 1964 from Elliott Donnelley of Lake Forest, IL, who took an interest in the accomplishments at Hesston. With his generous financial assistance, during 1965-1968, the remainder of our 155 acre site was purchased and a unique dual gauge (24"/36") railroad was constructed. The La Porte County Historical Steam Society, Inc. was chartered as a not-for-profit organization on December 16, 1968 and the original La Porte County Threshermen club was absorbed and dissolved. In 1969, the IRS granted recognition as a 501(c)(3) not-for-profit corporation.

The museum and its volunteers work to continually improve educational experiences for our community and its guests.

A $2.5 million fire on May 26, 1985 destroyed most of the large railroad equipment. Nine cars, the Henschel, and a diesel locomotive, along with many tools and small parts were lost. Also badly damaged were the Shay, Porter, and India locomotives.  Members purchased two Plymouth gasoline locomotives, and along with a railroad coach that was purchased with a grant from the La Porte County Tourism and Convention Bureau, railroad operation (but not steam) resumed in time for the 1985 show. In early 1986, permission was received from the insurance company to begin salvage operations.

The India locomotive was bulldozed out of the engine house rubble on March 13, 1986 and taken to the main shop for restoration. Just 89 days later it was back on the rails and under steam. The next day, construction started on two 24" gauge passenger cars.   Dr. George Mohun of Novato, California contacted us, offering 4 locomotives and 8 flat cars, the remains of the Mecklenburg Pommersche Schmall Spurbahn Railroad in East Germany that was intended for a steam tourist railway near San Francisco. This railroad was never constructed and the equipment was stored on his ranch for 17 years.  After an inspection trip, funds were borrowed and the equipment was purchased.

The equipment arrived on April 14, 1987. The brand new, yet 47 years old,  CSK was immediately placed in the shop for cleaning and inspection. It was fired up for the very first time in August 1987 and now serves as our regular locomotive for weekend operation.   The India locomotive was retired in 1988, after a crack developed in the copper firebox, not quite making it to 100 years of operation. In 1990, the Orenstein & Koppel 0-8-0 was moved to the shop for a heavy restoration.  In 1997, it was temporarily de-superheated and, in 1998, was reflued by the Hesston shop crew. Also in 1998, work started on construction of an enclosed passenger coach for the 24" line.

2006 was to be the museum’s 50th anniversary. So when the Board of Directors asked Ted Rita to become  assistant GM, helping John Edris with most aspects of management in 2000, Ted accepted with a condition - it was time to restore and operate the Shay Locomotive. Ted assembled a crew of dedicated volunteers that shared his love of the Society and the locomotive and, after 21 years of inactivity, the #7 steamed again in time for the 50th annual Labor Day Weekend Steam & Power Show. Ted says, “ this restoration changed the whole place, the morale, the mind set of our volunteers, and the support of the public. It was the most important thing we could do to get us pointed in the direction everyone wanted to move to.”

Ted was right. The museum saw completion of a new, beautiful, timber-framed, open depot / ticket booth for the 2007 season and the first “School Days” STEM  field trip. Since then, the volunteers and museum host one local school each year for a free field trip.

During this time period, the advertising committee was put together and rebranded the museum as a quality, family-friendly, educational attraction.

Doc’s Soda Fountain, complete with a 1930s soda bar and new modern restrooms, opened in time for the 2013 season opening. That improvement saw an overwhelming change in guest reactions.

The improvements, branding, and community outreach have increased attendance and attracted more volunteers to staff the ever-growing events the museum puts on every year.


Master plans are to be released in 2022

People with Passion
for Historic Machines

The La Porte County Historical Steam Society is a group of people dedicated to restoring and preserving steam equipment which played such an important part in the history of American culture and improved the quality of life on a global scale never seen before. While all have a common devotion and intent of purpose, the members of this group have a wide variety in their background, business or profession, and education. 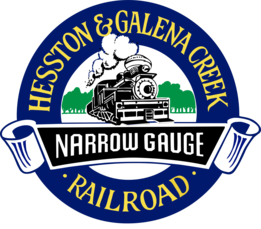 Educating future generations about the role steam machinery played in the United States and how it improved the quality of life globally.

Accomplishing this by the unique means of a living history museum of steam powered equipment, including railroad locomotives operated in a safe and professional manner. 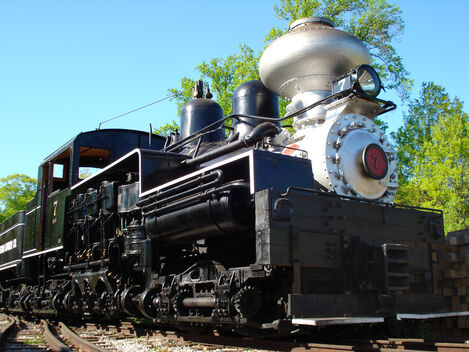 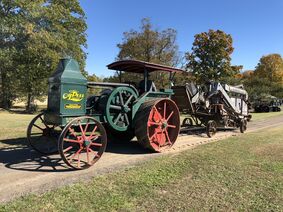 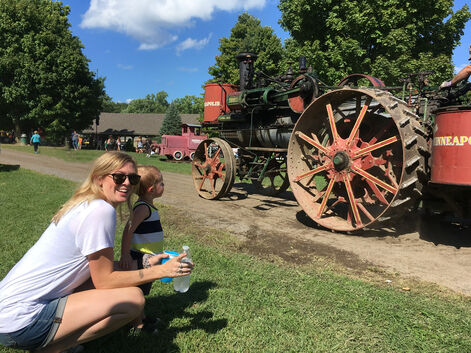 A place of thought of innovation & quality of life. 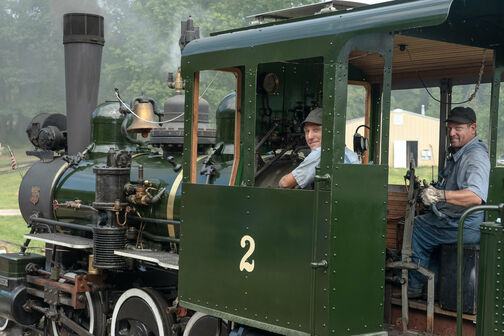 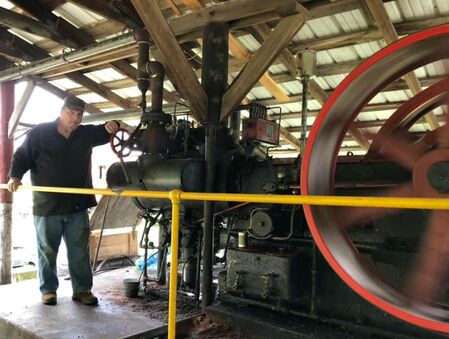 The most exciting
learning experience in the area 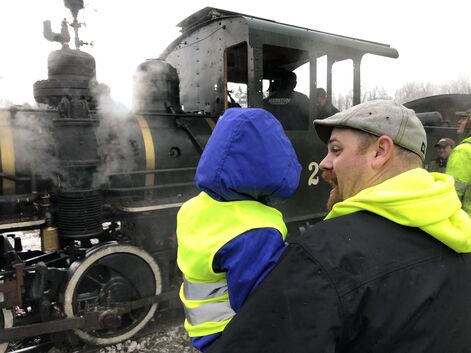 The RailroadThe railroad is a recreation of a 1900's narrow gauge logging railroad that would have supplied sawmills with logs but also transportation to different rural towns and villages. Other common freight as well.Weekend (Memorial Day to Labor Day) operation of the railroad began in 1969. Additional buildings were erected and more equipment arrived for restoration and exhibit each year. The SHAY locomotive restoration was completed and dedicated August 30, 1975. Unfortunately, Mr. Donnelley passed away in late December 1975. His family donated the 14" gauge railroad that had operated on his Lake Forest estate, so it was removed from the estate by society members during 1976 and moved to the steam grounds. Construction on the new site started in 1977. Completion in July 1982 was marked with a Golden Spike ceremony.In 2019 the railroad was re-themed to The Hesston & Galena Creek Narrow Gauge Railroad, the 1911 HK Porter Locomotive restoration was completed and improved the cut and topography at the highest elevation at Glacier Pass.

While each of our members is an important cog, but one member – the late ELLIOTT DONNELLEY – must be singled out as a strong spoke in our Society's wheel of development. Until his death in December 1975, he served as chairman of the Board of the Society from 1968 (when the Society was reorganized and reincorporated after absorbing the predecessor group, the La Porte County Threshermen which was incorporated in 1957). During his association with it, including while he served as president of the organization, his generosity to the Society knew few bounds. Additional land and buildings were purchased, buildings erected, the present length of dual gauge track was established, and locomotives and equipment were given to the Society by him with the knowledge that they would be faithfully maintained by members of the Society.  Even after his death, the Society continued to benefit by the establishment of a Memorial Trust Fund provided for the Society by his will and by the donation from his wife Ann (with the blessings of their four sons) of his 14" gauge trains which had run at his home in Lake Forest, IL., often for the benefit of charitable and civic organizations. 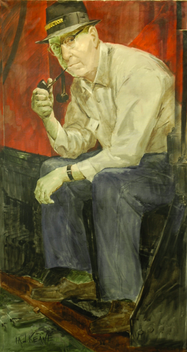